In 2001, the previous sponsoring organization began removing the Native American theme (and all such references) from their programs official literature. On August 1, 2003, the move was made official and the Indian Guides and Indian Princess Programs were replaced by a newly developed program of their own. 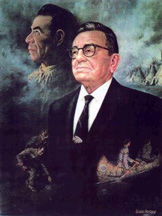 In an effort to remain true to the traditions and heritage of the original programs established by Keltner and Friday, and to continue to honor the Native American theme, on August 13, 2003, the leadership of the Yo-He-Wah Indian Princess Program and the Wichita Nation Indian Guides Program joined together and voted unanimously to combine their resources and establish Bear Creek Federation, Inc.